Dr. Chris Anderson, Professor of Fisheries Economics at the University of Washington 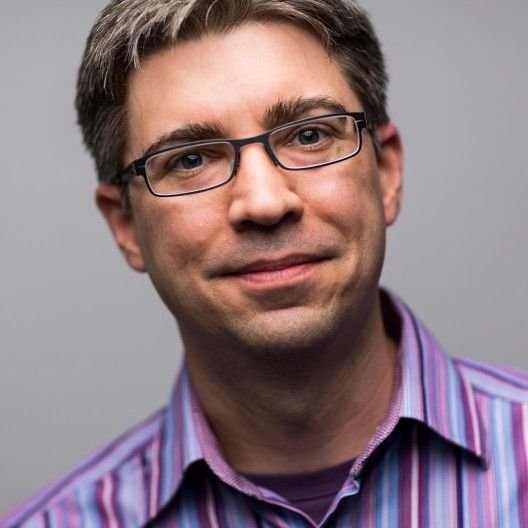 Today’s Farmed Fish [TFF]: What initially made you decide to inflict a blind taste test upon your students, and were they up for the challenge?

Chris Anderson [CA]: [Laughs] I swear it's not just a gimmick to improve my teaching evaluations. My class covers a wide range of economic, social, and environmental aspects of fishery management. We talk a lot about individual case studies and how policy influences various fisheries outcomes. The blind tasting lets us talk about how the very fish from some of the fisheries we’ve studied actually taste. This is important because what matters most to the consumer is how the fish tastes, and that affects the producers, harvesters and communities we study. So I’ve conducted a blind tasting of farmed and wild salmon for the last three years. Turns out, it's a popular lesson!

TFF: Let’s cut right to the chase – What are the results from the taste test?

CA: When encountering the samples blind, most participants actually liked the farmed fish.

TFF: WHAT?! SAY THAT AGAIN!

CA: Haha, yeah, most people are surprised in spite of themselves to learn they prefer the farmed fish. While fresh king salmon was the favorite of half the class when it was available (and who can argue), if only the frozen king was available, a farmed fish was chosen as the favorite by 79% of participants (57% farmed steelhead and 22% farmed Atlantic). The participants who preferred the fatty richness of fresh king (about half the people), when confronted with frozen king instead adopted Atlantic and steelhead as their favorites over frozen sockeye. The strong, lean sockeye was consistently preferred by about a quarter of people, regardless of the type of king.

TFF: Interesting! Who exactly are the students lucky enough to be in this study?

CA: The students in my fall graduate fisheries economics class at the University of Washington. Most are getting Master’s degrees in the School of Marine and Environmental Affairs; others are advanced undergraduate or graduate students in the Fisheries and Aquatic Sciences program. Many of these students consider themselves informed seafood consumers and frankly, often say they avoid farmed fish because of arguments against aquaculture which I usually learn are based on outdated information. So it’s an interesting experiment for me as it leads to a very spirited discussion afterwards.

TFF: So how did you select fish for your tasting?

CA: The day before the experiment I go to my grocery store fish counter and buy a piece of every type of pink fish available. Since it’s usually during the first week of December in Seattle, I can often get a variety of farmed, wild, fresh, and frozen salmon samples: Sockeye salmon: wild caught in Alaska during the summer season, frozen, $9-12/lb King salmon: wild caught in the Pacific Northwest or Alaska during the summer season, frozen at $15-20/lb (two years), fresh at $30/lb (one year) Atlantic salmon: farmed in the Pacific Northwest, fresh, $10-14/lb Steelhead trout: farmed in the Pacific Northwest, fresh, $9-14/lb While they are all firm pink fish, these different species represent a wide range of salmon flavors and textures, from the lean red sockeye salmon to the fatty pink Atlantic salmon. 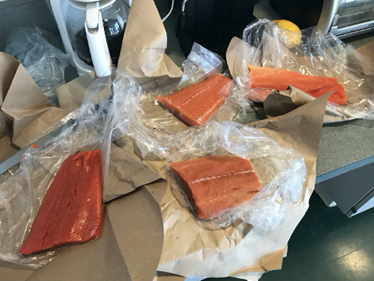 TFF: And how do you know people weren’t just responding to how you cooked it?
CA: To set up the blind tasting, I season each piece with salt and pepper. I then use a sous vide rig I bring from home to cook each piece to exactly 131 degrees, flash it under the broiler, and dot them with butter and a squeeze of lemon. It’s plain, allowing the differences in each piece of fish to be clear.

TFF: Why do you think there was such a big difference between the fresh and frozen king salmon?

CA: How the fish is handled before and during freezing makes a big difference in the texture. Often fish can be caught, frozen whole, thawed, then processed and frozen a second time, which effects the cell structure (texture). Most frozen king salmon is better handled than the samples that were available the days I ran the tasting (I suspect my king samples were twice-frozen), but it’s also a lot more expensive. My students weren’t paying, so maybe they didn’t think about this!

TFF: From this taste test, are you able to conclude anything about people’s preferences?

CA: In our class discussion, people shared they wanted their fish to be firm, flaky, and have clean bright flavors. Some people associated this with the fresh samples. But many people, erroneously, associated those same attributes with being wild. 39% of people thought the farmed steelhead was wild. In the first week of December, the fresh salmon is typically farmed. So they learn that, by flatly avoiding farm-raised fish, they are passing up their desired taste and texture. They are also invited to re-examine their own biases against aquaculture in general. But this is just the intellectual part of the equation, because in the real world, what matters most to the consumer is how the fish tastes. While the focus of the TFF campaign is to showcase examples of sustainably farmed fish raised both to be nutritious and in a healthy environment, the bottom line is that farmed fish also has to taste great in order for people to actually eat it.

TFF: What’s been your favorite of these fish tastings and how do you cook yours?

CA: Ha! I like fish. I buy all of these types of fish for my family, depending on price and my mood. If I’m not using sous vide, I dust it with a mixture of half a teaspoon each of salt, pepper, sweet paprika, a quarter teaspoon of smoked paprika, and a pinch of cayenne, then sear it in butter and olive oil in a hot cast iron skillet.